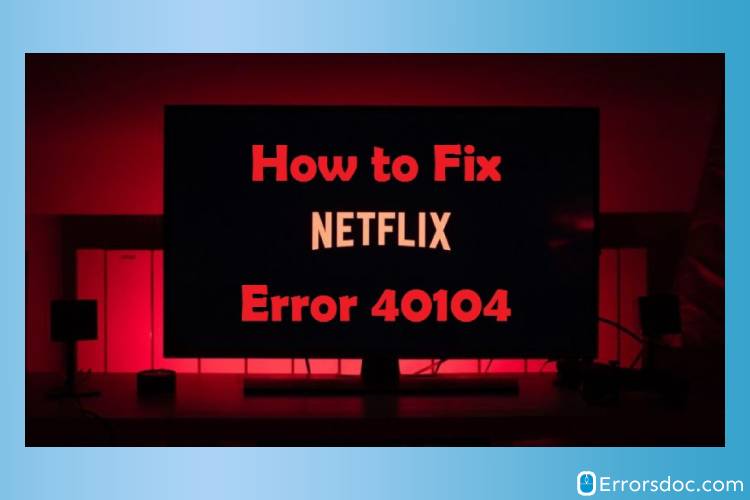 For the users of Netflix, coming across the message “Cannot Play Title. Please Try Again Later. (40104)” can create certain problems. The occurrence of this message can prevent the users from watching movies, TV shows, and series on Netflix. Sometimes the downloaded titles won’t play due to the Netflix error 40104. In other instances, streaming on its website may be difficult. While researching the fixes for this error code, we found that removing network connectivity problems can be useful. Doing away with a slow internet connection can also work for this purpose. We also came across many other ways to remove the causes contributing to this Netflix error. The outcome of this resulted in a Netflix streaming experience without any error code.

This reading will discuss the meaning and causes of the error code 40104 in Netflix. In addition, several measures for fixing the error will also be shown. To know more, you can take the help of this summary:

For accessing the website or application of Netflix, a device is used. The coming up of the error 40104 denotes that a connectivity problem is preventing that device from making a connection with Netflix. This can make streaming difficult on the application or website. To smoothly view movies, videos, and shows on it, the Netflix error 40104 should be fixed.

Why does the Netflix Error Code 40104 Occur?

We have elaborated on the causes of the error 40104 while using Netflix. The causes can be found below:

To troubleshoot the Netflix error code 40104, ensure that this streaming service is supported by the provider of your network. When the downloaded titles form the cause of this Netflix error, the content can be downloaded again. Depending upon some situations, a direct connection between your device and modem can help in solving this error code. In addition, you can try disabling the VPN on your computer for some time for fixing the 40104 error.

Fix 1: Check that Netflix is Supported by Your Network Provider

Some of the users who had been facing the error 40104 while using Netflix have shared that they were using a public wifi network. The network did not support the services of Netflix. Hence, the error 40104 kept bothering them. Certain users have also shared that certain public wifi networks did support Netflix, however, its bandwidth was limited. So, the error would continue to persist.

Since the same may be happening with you as well, you can check that the school, office, library, hotel, or hospital wifi being used supports Netflix. The network should come with better bandwidth. In addition, you can use a network other than your mobile data or a satellite network as it may not provide a good speed. To resolve the slow speed of it, you can use a new network. The error 40104 on Netflix should stop occurring then.

You may find an error 40104 Netflix message stating that the downloaded titles cannot be played. It may be useful to know that the downloaded movie or show may be an expired one. Thus, such a message may be occurring. The error, as well as the message, can be quickly removed by deleting the title and downloading it again.

When you open Netflix, you will see an icon denoting Downloads. Press it. Then tap the option of Edit. Use the red X symbol for removing the Netflix title. After a while, the title can be downloaded again.

Fix 3: Directly Connect Your Device to the Modem

You may be using a router to connect to your Netflix streaming device. Problems with the connectivity of the router may be becoming a cause for the Netflix code 40104 error. As a suggestion, you can remove the connection of your device with the router. Your phone, computer, or any other device can be directly connected to your modem.

To execute this fix in the best manner, the directions listed here can be used:

Fix 4: Disable the VPN on Your Computer

The 40104 Netflix error VPN may be arising as a consequence of problems in this network. By disabling it, certain users have been able to watch videos on Netflix without encountering the error again. You can also disable the VPN for some time. In the Settings of your computer, you will see Network & Internet. Select it and then move to the menu towards the left. Choose VPN from the menu. A VPN connection has to be selected. Then by pressing Disconnect, the connection will be disabled.

Fix 5: Update the Netflix Application on Your Device

Error codes like 40104 can appear while running Netflix when the application has not been updated. It is important to realize that updates for the app are released to fix the possible bugs. In addition, the updates help in improving your experience. So, if you have not updated Netflix, then you will be suggested to do it now. After updating it, the application may no longer be bugged by the Netflix error 40104.

The network settings on your phone or system may interfere with your experience as you stream Netflix. The interference may make way for the Netflix error code 40104. To get rid of it, the network settings can be reset. Resetting them would restore the settings to the factory default state. You can head to running Netflix after this without worrying about the error coming up.

How to Fix the Netflix 40104 Error on iPhone, iPad, and Other Apple Devices?

On several Apple devices that are displaying the 40104 error, the Netflix application can be reinstalled. Any problems in the application can be removed by deleting the app. An iPhone or iPad can get affected by the error Netflix 40104 code when the Apple device is carrying certain issues. The device should be restarted. As a result of this, the iOS device will get refreshed.

The Netflix error 40104 in the downloaded content is usually observed on Apple devices like iPod touch, iPhone, or iPad. On such devices, this error can be cleared by restarting them. You can turn off your device using the Side button and Volume button. When 10 seconds have passed, it can be started again. You can run Netflix now and check that the error is not taking place any longer.

More steps relating to this measure can be discovered by reading further:

Important: In certain situations, the slider may not appear when the “Side” and “Volume” buttons are pressed in one go. You can press the “Sleep” or “Wake” button for some time. A red-colored slider should appear. This slider can be dragged for turning off your Apple device.

Fix 2: Reinstall the Netflix Application on Your iOS Device

The error 40104 can be seen on Netflix on iOS devices when the application has issues. These issues can be eliminated by uninstalling and reinstalling the streaming application. On your device, you can hold the icon of the application. The “X” like option can be pressed when the Netflix app starts to shake. Later, you can download and install it again from the App Store.

Warning: Prior to uninstalling the Netflix application, you should know that your movies, TV shows, etc., may be removed.

Important: At the time of reinstalling “Netflix”, you will be required to input your “Apple ID” as well as its “Password”. It will be useful to have the correct details beforehand.

Considering All of the Above,

The Netflix error 40104 in the downloaded content, titles, etc., can take place and affect your experience. The website of the service being down, you can do nothing but wait for issues to resolve from the side of Netflix. However, when your internet connection or device is resulting in this error, multiple fixes can be applied. Here, we elaborated on the possible causes of the 40104 error code. An attempt was also made to list every useful fix for removing this error. We believe that the problem won’t be persisting on your device at present. So, you can happily start watching your favorite videos on Netflix.
Netflix error codes are of various types such as TVQ ST 103, 30103, etc. Apart from the 40104 error, you can try resolving the Netflix code TVQ ST 103 error and Netflix error 30103 with our help. You can click here to find the links to these posts.