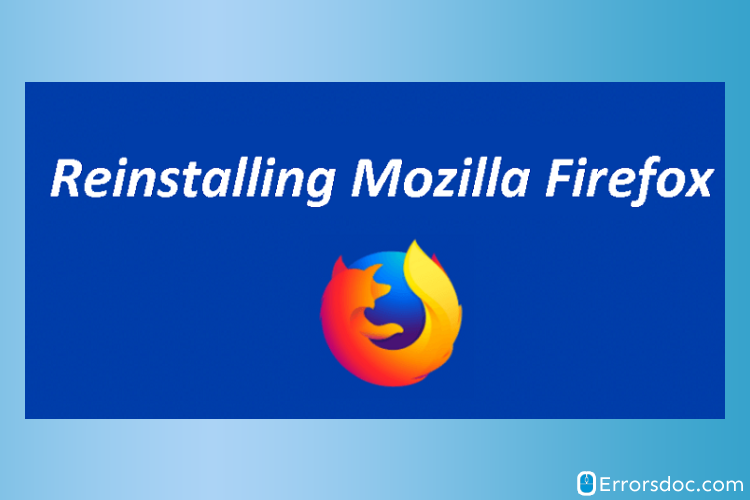 The Mozilla firefox comes in the category of the best browsers for the Windows systems. It is widely used in Windows 7, Windows 8, and Windows 10 systems. But there are also some problems with Mozilla firefox as many of the users report about Mozilla Firefox not opening on Windows 10. If you are also thinking of “how do I fix Mozilla firefox not responding?”, then you are at the right place. In this article, we will tell you all the possible stepwise solutions to fix the Mozilla Firefox is not responding on Windows 10 error. All the below-mentioned steps are easy to follow and execute and you can do it all alone. Some of the common firefox issues reported by the users are “firefox won’t open”, “High CPU usage problem”, “firefox slowdown issue”, and “firefox freezing and crashing”.

Step 1-Firstly, open the Mozilla Firefox in your system, then go to the top-right of the screen and click on Menu. You will find the Menu option displayed as three horizontal lines.
Step 2- Make a selection for the option of Add-ons.
Step 3- Now, move towards the left side of the screen and click on the option of Extensions. The list of all the firefox extensions will be displayed here.
Step 4- Find the extension that is creating the issue and click on the button of disable.
Step 5– Launch the Mozilla Firefox browser again and check if the problem is solved.

Note that “if you do not have the idea about which add-on is causing the issue, then you must try disabling then enabling all the existing add-ons one by one. Keep on repeating the same process until you find the ad-on that is creating the problem”.

Now, you must be thinking that how will you disable the add-ons if you are not able to open the firefox browser already. No problem, you need to follow the below-mentioned steps for this case.

If the Mozilla Firefox not opening error is still there with your system, then you need to try the below-mentioned solution 2 for getting the desired output/result.

There are chances that a third-party antivirus software in your system may be causing the Mozilla firefox not opening problem. Many Avast antivirus users have reported that the problem was fixed when they disabled the Avast HTTPS scanning feature. Below are the detailed steps to do the same.

Step 1– Launch the antivirus software on your system and go to its settings.
Step 2– Select the option of Components and then select Web Shield.
Step 3- Make a click on the Customize button.
Step 4– Disable the option of “Enable HTTPS Scanning.”
Step 5- Now, save the changes.

The mentioned steps will also work for other antivirus programs, you just have to find the option of HTTPS Scanning and disable it. But if the Mozilla firefox not opening error continues to occur even after disabling the HTTPS scanning. Then, you can try the solution 3 i.e. Firefox cache clearing.

The firefox cache can also be the reason behind  Mozilla firefox not responding error. The stored cache can result in high CPU usage and slowdown of the Firefox browser. The cache must be cleared from your system and the steps to do so are mentioned below.

Step 1- Launch the Firefox browser in your system and go to its settings at the top-right corner.
Step 2- Now, go to the Library, then History and then Recent History.
Step 3- After opening the Clear All History window, select all the items from the drop-down list.
Step 4- Click on the Details button and make the selection for all the items including cache that you wish to remove.
Step 5- In the end, click on the Clear Now button.

The browser settings may also be the reason for Mozilla firefox not responding error. There is a quick fix for this, try refreshing the Firefox. This step will result in the removal of all the extensions and your Firefox browser will get back to its default settings. Below are the detailed steps to do the same.

Step 1- Launch the Mozilla Firefox in your system.
Step 2- Now, you need to type “about: support” (excluding quotes) in the address bar and hit enter.
Step 3- Make a click on the button of Refresh Firefox.
Step 4- Follow all the system-guided instructions to bring the FIrefox
browser back to its default settings and check if the issue has been resolved.
If you are not able to launch the Firefox in normal mode, then launch it in the safe mode (steps mentioned in solution 1) and then follow the above-mentioned steps.

You can try the Solution 5 if bringing back the FIrefox browser to its default settings was not helpful in fixing the Mozilla firefox not responding error.

Mozilla Firefox not responding error may also occur due to a corrupted file and for fixing this, you need to create a new file. Do remember that creating a new profile will delete all the existing bookmarks, saved passwords, and history. You must create a backup of important things. The steps to create a new Firefox user profile are given below.

Step 1- Press the key combination of Windows key+R on the keyboard to open the Run dialog box.
Step 2- You need to type “firefox.exe -p” (without quotes) in the Run dialog box and hit Enter.
Step 3- Now, a list of all the available profiles will be displayed.
Step 4- You will see the label of default next to your profile. Make selection of your profile and then click on the button Delete Profile
Step 5- If you wish to delete your profile completely then click on the button of Delete File.

After you follow all the above-mentioned steps, the profile must have been deleted successfully. Now, the new profile will be created automatically when you will launch the Mozilla Firefox again. You can also create a new account by yourself and the steps to the same are mentioned below.

Step 1- Press the key combination of Windows key+R on the keyboard to open the Run dialog box.
Step 2- Type “firfox.exe -p” (without quotes) in the Run dialog box and then click on OK.
Step 3- Now, click on the button of Create Profile.
Step 4- Click on Next and then input the profile name as you want to.
Step 5- Make a click on the Finish button.
Step 6- In the end, select the newly created profile and then click on Start Firefox.

The issue of Mozilla Firefox not responding must get resolved by creating a new user profile. But if the issue is still irritating you, then you can try solution 6 i.e. reinstalling the Mozilla Firefox browser in your system.

Step 1- Go to the taskbar and click on the Windows icon.
Step 2- Now, click on the Settings button that appears as a gear symbol.
Step 3- Select the option of Apps in the settings.
Step 4- Find and click on the Mozilla firefox option.
Step 5- Make a click on the Uninstall button.
Step 6- Now you need to download the Mozilla Firefox installer file from their official website.
Step 7- Open the downloaded .exe file and then follow the system-guided instructions to install the Firefox browser in your system.

If all the solutions have failed to fix the Firefox not responding error in your system, then you can try the last solution mentioned below i.e. switching to the Beta or Nightly version of the Mozilla Firefox.

Switch to the Beta or Nightly version of Mozilla Firefox

Switching to Beta or Nightly version is the last solution that you can try to fix the Mozilla Firefox not opening error. You will have to uninstall the current version of Mozilla Firefox that is installed in your system and then install the FIrefox Beta version. Do remember that the Beta version will comprise all the latest functionalities and features but there are chances of some new issues & problems as the version will be on the testing phase.

The same condition applies to the Nightly version also. You will enjoy the latest features and updates but the version will be on a testing phase so you may encounter some new problems.

We hope that the above-mentioned solutions were helpful in fixing the Mozilla Firefox not responding error in your system. But if the error still persists in your system, then you can get in touch with our technical team through live chat support for further assistance. Our team is ready to handle all your queries 24*7 as we believe in achieving greater customer satisfaction and trust.